Above: Pencil for RSA #14 cover. Pencils and lettering are all done for RSA #14. Instead of inking right away, I'm going to try and write issue #15, but I'll try and do another video of inking that cover this month.

Here I am inking a panel for Ralph Snart Adventures #13 releasing this Spring. This issue will be the final part of the Origin Trilogy.Inking panel two, page 17 of issue #13 of RSA. Yes, I've gone full nerd and labelled the brush for when I first started using it. Double-speed playback (I'm not that fast -- anymore.) Normally I'll use just one brush per issue, but have had a hard time finding a good brush so have gone back and used an array of older brushes for this issue. I've been inking so much lately, I've created a bulbous callus on my pinkie finger -- such are the travails I must endure!

Here I am inking a panel for Ralph Snart Adventures #12 releasing this Fall. This issue will be part two of the Origin Trilogy. Took me about 20 minutes to ink that one panel, which is 1/6th of a page, so two hours to ink a page. So, I'm about as fast as I've always been, but it doesn't seem like it. Not a big fan of inking in the Summer because of the heat, so I like to get it done in the morning.I'm doing these videos because over the years I've been asked how to ink (including a few pros). What I think they're actually asking is how do I ink in particular (not generally). Best way to show how is to observe and then practice yourself. When I worked as an apprentice at an advertising art studio, I would routinely, and was encouraged to, sit and watch the other artists work whether they were doing animatics, lettering, marker comps, painting, paste up or photo retouching. A few didn't like you to watch them. Maybe they felt inhibited, but more likely they didn't want to divulge any secrets (or just hated my company!). It was also advantageous to learn all aspects of the business.
Materials: brush, board, ink 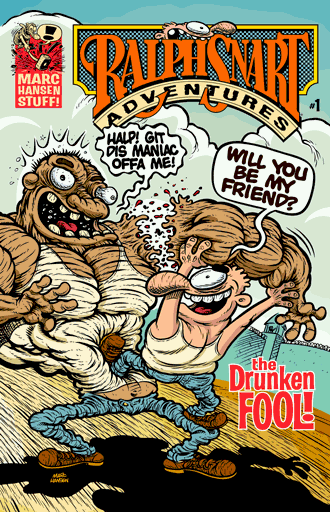 Thirty-five years ago the very first issue of Ralph Snart Adventures was released. Two months before that, I had had to change the name from Ralph Snarf to Ralph Snart or risk a lawsuit from Denis Kitchen. Three months before that, I had written and drawn that first issue in a roach-infested studio apartment in the Edgewater neighborhood of Chicago. I was oblivious to the fact that at the time, it was one of the worst neighborhoods in Chicago a destination for Eastern European transients controlled by a Vietnamese gang whose headquarters was just a half block away.

When that first issue was printed, it was done the wrong size. A Chicago printer called Sleepeck did the printing, and for some reason had printed it approximately half size like digest size. The copies were all destroyed, but I saw one of them cute but ridiculously small. Do over! Aside; I've had a history with printers so, yeah, I wasn't too surprise my initial foray into the comic book industry started out messed up. Luckily it was redone and delivered to the distributors on schedule.

Here I am inking a panel for Ralph Snart Adventures #11 releasing this Spring. Another different angle for the camera. This issue will be part one of the Origin Trilogy.

The Origin of Ralph Snart

Just finished pencils and lettering for RSA #11 -- the first part of a trilogy about the origin of The Snart. I also wrote an article on some of the influences that helped create RSA way back when.

This starts the beginning of the new format -- horizontal so an entire page can be seen on a desktop monitor. Part two is about halfway written.

If you want a missive about how Snart changed your life to appear in the next Rubber Room Gossip, now's the time to email them to me. I never grow tired of reading about how you found your first issue of RSA on a rack in a 7-Eleven and how your teachers beat you when they discovered you reading it in class and how your mom later threw all your Ralph Snarts in the garbage after you went to college and how your dad still won't speak to you because once you said Gangway, Fathead! to him. Ah, memories.

I should be uploading a new inking video on youturd relatively soon.
« Older PostsNewer Posts »

Cartoonist and creator of Ralph Snart Adventures, Weird Melvin and Doctor Gorpon. Hansen has done most of his work for NOW Comics, but has also done work for Marvel, Disney and Kitchen Sink Press.

Today, Marc Hansen publishes Ralph Snart Adventures as an ebook on a sporadic basis. Current issues are available on his website. Keep up with Ralph Snart on Twitter and Facebook.

RALPH SNART IS A REGISTERED TRADEMARK. COPYRIGHT 2022 BY MARC HANSEN.