Here I am inking a panel for Ralph Snart Adventures #10 releasing in November. Just testing a different angle for the camera. Lighting sucks. Can you tell I haven't inked in a while? Using an old brush (from the last issue). Will be chucking this one in the trash and getting a new one. I can't talk, ink and chew gum at the same time so no sound. Lettering was done in software at the layout stage. 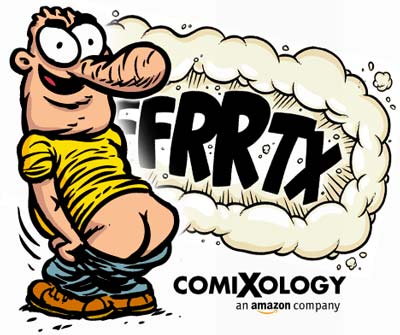 Ralph Snart Adventures along with my other comics have been removed from ComiXology at my request. Those that made purchases already will still have access to their books. The reason for the removal was because I didn't like ComiXology's arbitrary sales, which undercut and conflicted with the prices of my own webstore. My books are already priced super cheap, so having a "sale" doesn't make any sense, and doing so without the publisher's input is just plain rude.

Almost all of my digital comics purchases are through my webstore, so no big loss. Must've been some Amazon initiative to trivially add to their billions. Besides that, all of my new stuff is exclusive to my webstore. So there, Amazon. Nerts to you!

The Ralph Snart origin tale will begin with issue #11 instead of the next (#10). The new format will also be delayed until #11. The origin will be a "reboot of the franchise" as Ralph loses his mind and begins his strange trips to his Fantasy Otherworld, and while in reality, Doctor Goot and other morons nefariously and rudely give poor Ralph a hard time. 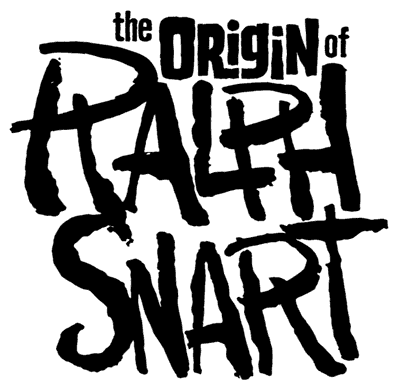 The last few issues of RSA have actually been on a regular basis, and I'm going to try and maintain it, which is twice-a-year -- Spring and Fall. I could probably do three per year, but they'd be shorter in length and my Summers wouldn't be as much fun. I'll also do the free t-shirt giveaway with each issue release until the stock gets too low.

The next issue (ten) will begin a three-issue retelling of Ralph Snart's origin, you know, where he goes crazy and escapes "bitter reality" by regressing into a bizarre "fantasy otherworld" and drinks lotsa beers and parties down. I've never done a complete story, only a couple of quickie shorts -- a two-pager in FanGraphix #3 (1985 - first appearance), and a four-pager in RSA Vol 3 #5 (1989). The first issue is already written, and I plan on writing the rest of the trilogy over the Summer. And yes, Doctor Goot will snatch brains and Mister Lizard will guzzle beers (respectively) upon their return.

The upcoming issues will also start a new format -- something that will be more optimized for being viewed on digital devices. I have been doing it as a traditional printed comic with a 6-5/8" x 10-1/4" size, color covers, inside covers black & white and similar page counts. That's all comforting and familiar but has no relevance for a digital book, which has less boundaries (ie: a digital book doesn't have an inside cover). So, the new format will be closer to what I did on Volumes 6 and 7.

I'm also still working on a free book that will replace my fansite web page. Not sure when that's coming out.

Read It And Weep

My digital comics weren't originally intended for smart phones with their small screens, although mine look just dandy on my iPhone 6s. 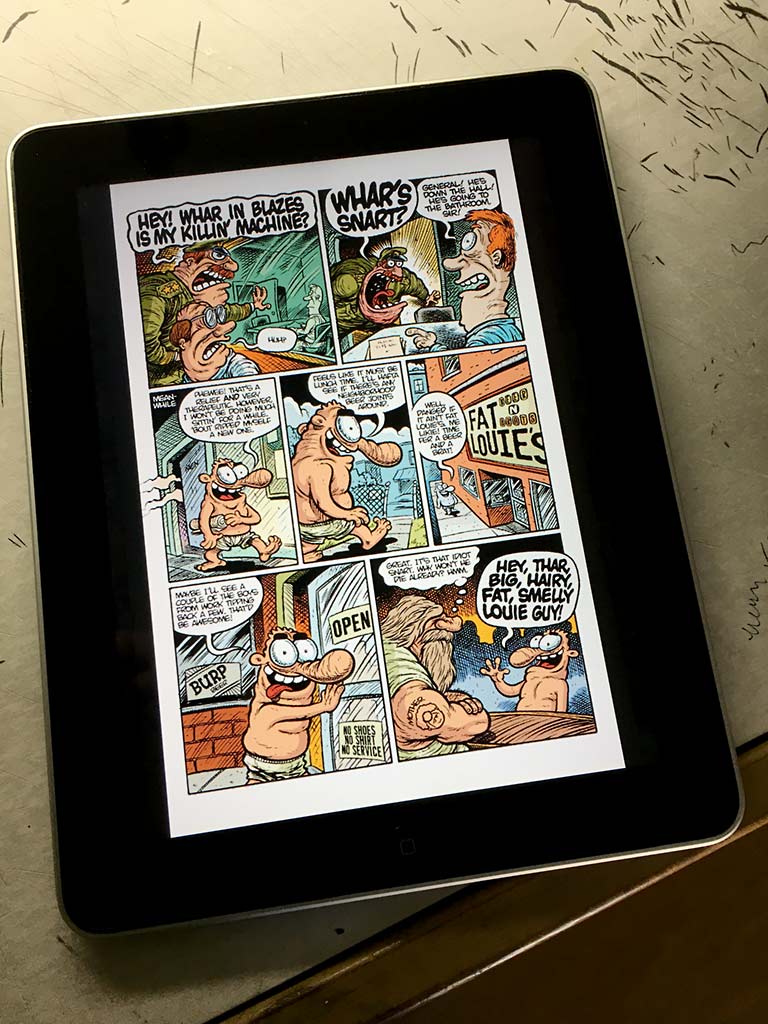 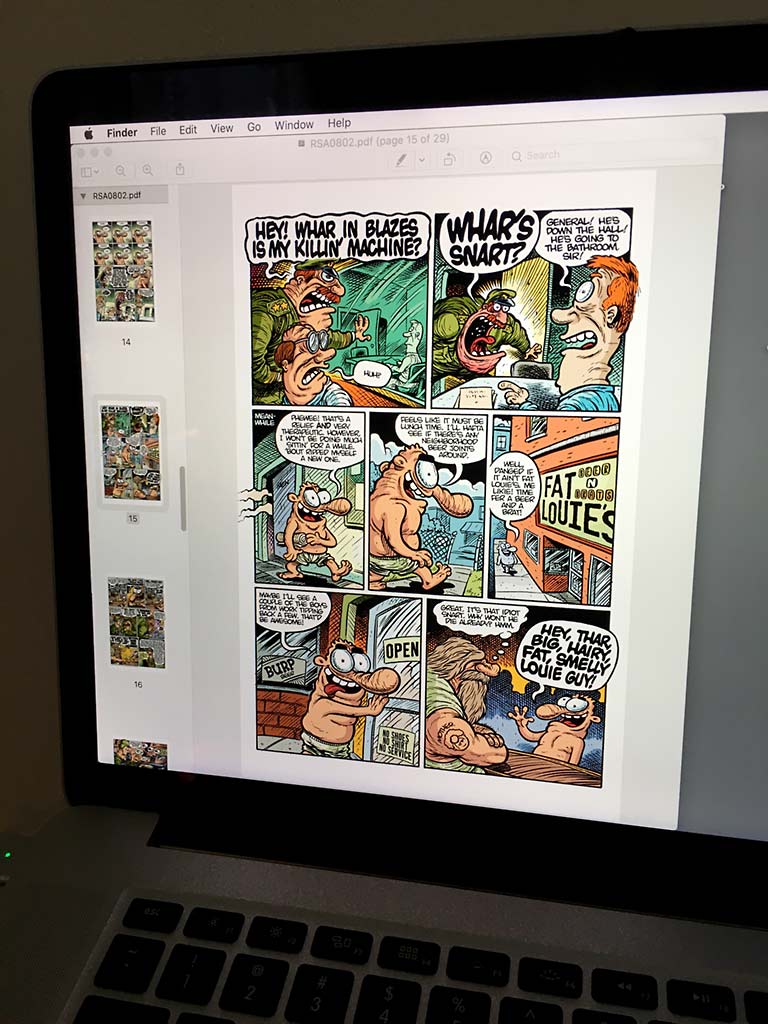 Here's the same page on an old 21" Mac monitor. 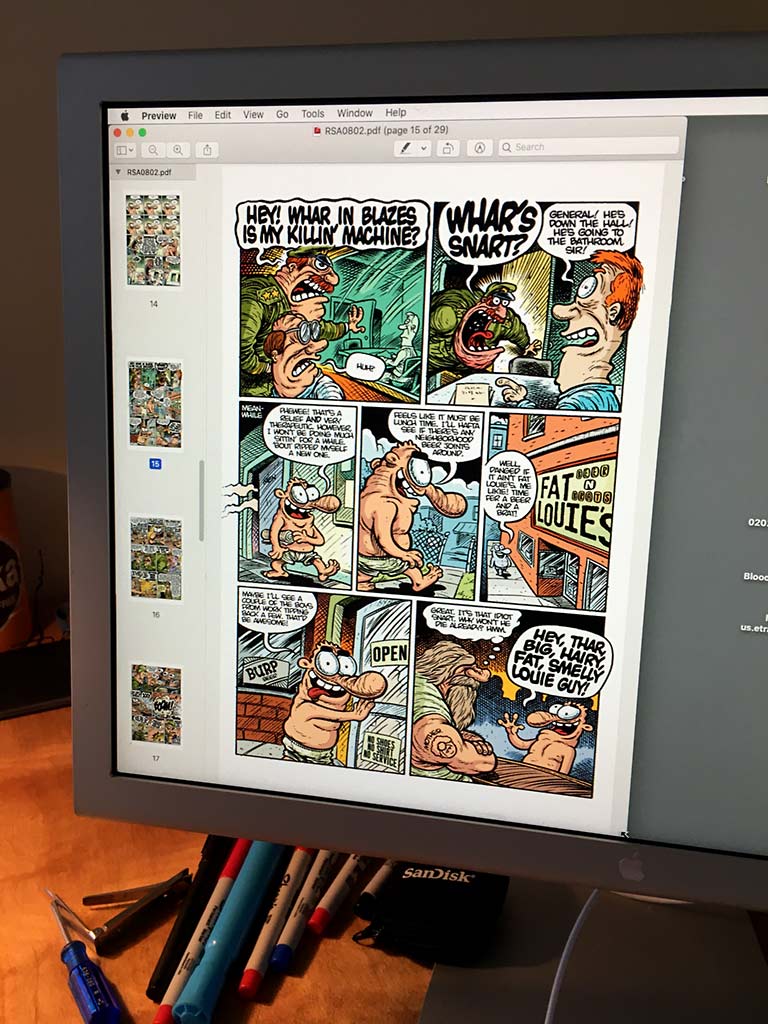 Now I'm not saying you have to read the comics on the same hardware. I'm just pointing out that tablets, laptops and desktops make the most sense, and that using a small smart phone to view and read digital comics doesn't make much sense. But then WHATEVER.

The inks and colors for Ralph Snart #9 should be done next week. Meanwhile, I'm holed up (sheltering in place) like a caged animal. Crawling around on all fours, howling at the window at passer-bys, flailing and frothing, so pretty much not noticing much difference since before the virus. 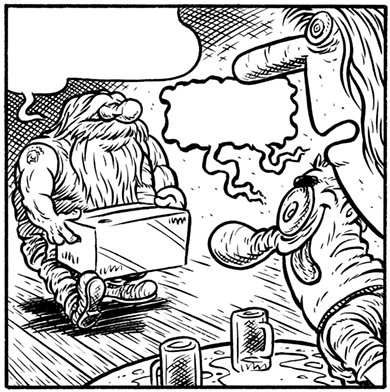 Also waiting for beer #49 to age -- only about a month since bottling. Takes a couple weeks to carbonate and then at least four weeks of aging before it starts to get good.

Here's the cover from layout to pencil, ink, painting and final image. The painting is actually just an ink dye wash on translucent paper -- no color, just a one color wash. I wanted to get all of the textures and look of a watercolor but without all the hassle of mixing and painting a bunch of different colors.

After scanning, it's changed from grayscale to CMYK, selections are made and color values are changed. In concept, I think this is similar to what Richard Corbin used to do (early Warren stuff and Den), only I think he was painting and airbrushing on acetate for each color, which must've been a huge pain and no way to tell exactly what the final result was going to be. Much easier with a computer.